Clifford Dudley Wood began his career by studying art, design and composition at Swinburne Technical College in the early twenties and then at night classes at Swinburne and the Victorian Artists Society. He started exhibiting works in a variety of styles in the Depression years, while at the same time rapidly becoming one of the country’s foremost commercial artists.

His ability to capture both the form and the atmosphere of any subject established him as a superb water-colourist and oil painter by the end of the 1940’s. Although not appointed as an official war artist, he continued to sketch and paint when assigned to the Allied Works Council in Queensland and Darwin as a camofleur. Many of these World War II works are held in the Australian War Memorial, Canberra.  Later he was not only drawn to depicting the beauty of the Australian wilderness, but also undertook a wide variety of industrial commissions, travelling from Newcastle to Wittenoom, from Hobart to Whyalla, to illustrate Australia’s post-war reconstruction. Later, in the 1960’s, he became fascinated by Australia’s Red Centre and it’s Aboriginal inhabitants. 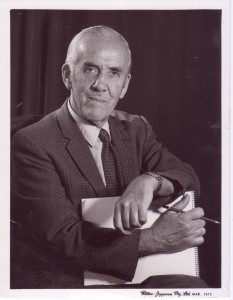 “This survey of the works of Dudley Wood fills an important gap in the history of Australian Art, a period in which fine artists of the calibre of Dudley Wood turned, for mere financial survival to the practice of commercial art…. Like all true artists, Wood continuously experimented with his materials, culminating in the diluted or transparent oil medium he used to striking effect in capturing the radiant colours of the Outback”

C. Dudley Wood remained firmly in the traditional school of Australian landscape artists. He resisted the turmoil and controversy of contemporary art developments and continued to paint for the enjoyment of a large and loyal following. He built a career based upon hard work, artistic skills  and the taste and ambitions of the generation which had built a prosperous and comfortable society under the leadership of Sir Robert Menzies. A generation which had experienced the depression and the war, sought an art in which landscapes they recognised were depicted with skill and a beauty which delighted.

Amongst the artists Dudley Wood most admired were Lloyd Rees, Blamire Young,  Sir Hans Heysen,and Harold Herbert . These artists all depicted the qualities of light with a lyricism that Dudley Wood also aspired to. Wood produced a body of work marked by dedication, skill and an enormous range of both subject matter and technique, in a career spanning almost fifty years.

In 1945 Wood married Katherine Ewers who as a both as critic and helper made a big contribution to his work. Kath had completed the Trained  Primary Teachers Certificate of Art, and had also worked with the Red Cross as an occupational therapist with men injured during WWII. She briefly made ceramics, but only for her own pleasure. Kath also assisted with exhibitions,  travel and with Cliff’s students, as he taught watercolour classes at  his studio in Canterbury during the sixties to early seventies.

All paintings and images on these pages are protected by copyright.

Inquiries about copyright, the artist or his paintings may be made below. Please indicate the nature of your inquiry here.